Founder and Ambassador for Energy & Infrastructure of PTS Advance, headquartered in Irvine, California

We’re constantly being bombarded with the EV movement, but Americans must have a multitude of subconscious reasons for not buying into one of the major movements to save the world from itself as they are showing their lack of enthusiasm by avoiding the dealerships.

In a recent Los Angeles Times article, citing Edmunds data, The number of battery-electric models available more than doubled from 2018 to 2019, but EV sales budged in the wrong direction. In response to the major efforts by manufacturers, the horrific EV sales data shows that only 325,000 electric and plug-in hybrid vehicles were sold in the U.S. in 2019, down from 349,000 in 2018.

Those dismal numbers represent an embarrassing dismal 2% of the 17 million vehicles of all types sold in the United States in 2019. Are EV carmakers driving off a cliff?” 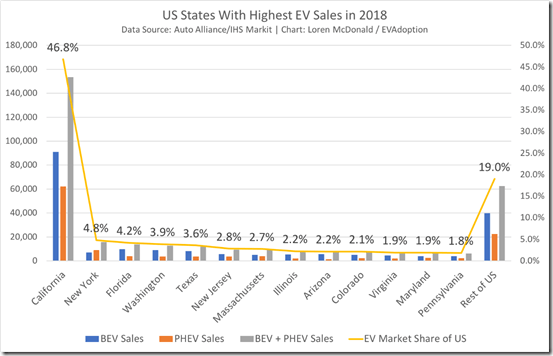 California remains the primary buyer of EV’s while the rest of America has shown little interest in the incentives and the increasing choices of models.

Let’s look at several of the factors that may be contributing to this lack of enthusiasm, that may be in the subconscious of the prospective EV buyers:

Agreed, there would be no fuel costs and no gas taxes to be paid with an EV owner, BUT, and that’s a big BUT. Beware of the “free” gift! Once fossil fuel cars are off the road, the only ones on the roads will be EV’s. You can easily surmise that it’s going to be the EV owners picking up the costs to maintain the highway infrastructures, probably through some form of vehicle mileage tax (VMT), to let the “users” pay for the roads.

EV’s are hyped as being pollution free. Well, not necessarily so. Its true EV’s have no tailpipes, but the tailpipes are located at the power plants generating the electricity to charge the cars batteries, and at the refineries that provide all the derivatives from petroleum that make all the parts of the EV’s.

Range and charging anxieties remain a constant sub thought for that next trip. To fully charge an EV, even at fast-charging stations, it takes anywhere from 30 minutes to 8 hours depending on how much of a charge (empty to full or topping off) your vehicle needs.

The post Americans Reluctant To Join the EV Train appeared first on LewRockwell.