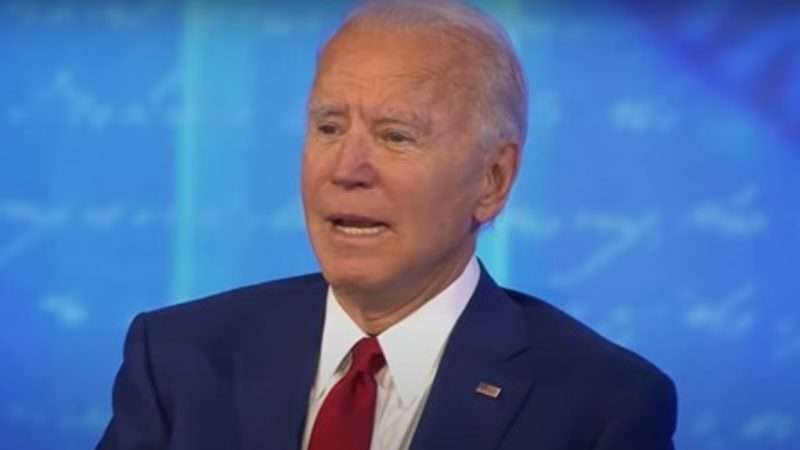 During his ABC “town hall” last night, responding to a question from moderator George Stephanopoulos, Democratic presidential nominee Joe Biden agreed that it was a “mistake” to “support” the Violent Crime Control and Law Enforcement Act of 1994. At the same time, he defended parts of the law, including the Violence Against Women Act, funding to support “community policing” by hiring more officers, and the now-expired federal ban on “assault weapons.” He also implied that the real problem was not so much the law itself but the way that states responded to it. “The mistake came in terms of what the states did locally,” he said.

Both the question and the answer were highly misleading. First, Biden did not merely “support” the 1994 law; he wrote the damned thing, which he has proudly called “the 1994 Biden Crime Bill.” Second, as much as Biden might like to disavow the law’s penalty enhancements now that public opinion on criminal justice has shifted, he was proud of them at the time. Third, the 1994 crime bill is just one piece of legislation in Biden’s long history of supporting mindlessly punitive responses to drugs and crime.

Biden is trying to gloss over a major theme of his political career. “Every major crime bill since 1976 that’s come out of this Congress—every minor crime bill—has had the name of the Democratic senator from Delaware, Joe Biden,” he bragged in 1993. Now he wants us to believe his agenda was limited to domestic violence, community policing, and gun control.

“Things have changed drastically” since 1994, Biden said last night, noting that “the Black Caucus voted” for the crime bill, and “every black mayor supported it.” In other words, now that black politicians and Democrats generally have rejected the idea that criminal penalties can never be too severe, Biden has shifted with the winds of opinion. But as Sen. Cory Booker (D–N.J.) noted during a Democratic presidential debate last year, that does not mean we should forget Biden’s leading role in the disastrous war on drugs and the draconian criminal justice policies that put more and more people in cages for longer and longer periods of time.

“The crime bill itself did not have mandatory sentences except for two things,” Biden said. He mentioned the law’s “three strikes and you’re out” provision, which required a life sentence for anyone convicted of a violent crime after committing two other felonies, one of which can be a drug offense. He said he “voted against” that provision, which is not exactly true. While he did express concern that the provision was not focused narrowly enough on serious violent crimes, he voted for it as part of the broader bill.

In any case, Biden did not just go along with the crime bill’s punitive provisions; he crowed about them. Like a crass car salesman hawking a new model with more of everything, he touted “70 additional enhancements of penalties” and “60 new death penalties—brand new—60.” He denounced as “poppycock” the notion, which would later be defensively deployed by Bill Clinton and Biden himself, that “somehow the Republicans tried to make the crime bill tougher.” Biden bragged that he had conferred with “the cops” instead of some namby-pamby “liberal confab” while writing the bill.

As for “what the states did locally,” the law was designed to increase incarceration. It provided $10 billion in subsidies for state prison construction, contingent on passage of “truth in sentencing” laws that limited or abolished parole. “What I was against was giving states more money for prison systems,” Biden said last night. But that is simply not true. As FactCheck.org noted last year, “Biden did support $6 billion in funding for state prison construction, but not the $10 billion that was part of the final bill.”

Despite Biden’s implication that he was not a fan of mandatory minimums, he zealously supported them in previous legislation, including the Anti–Drug Abuse Acts of 1986 and 1988. The latter law included a five-year mandatory minimum sentence for anyone caught with five grams of crack cocaine, whether or not he was involved in distribution.

As Biden explained it on the Senate floor in 1991 while holding up a quarter, “we said crack cocaine is such a bad deal that if you find someone with this much of it—a quarter’s worth, not in value, but in size—five years in jail.” To be clear: Biden was not marveling at the blatant injustice of that punishment. He was touting his anti-drug bona fides.

Because federal crack offenders were overwhelmingly black, while cocaine powder offenders were more likely to be white or Hispanic, the rule Biden supported meant that darker-skinned defendants received substantially heavier penalties than lighter-skinned defendants for essentially the same offenses. “We may not have gotten it right,” Biden conceded 16 years after he helped establish the 100-to-1 rule. Five years later, during an unsuccessful bid for his party’s 2008 presidential nomination, he introduced a bill that would have equalized crack and cocaine powder sentences.

The distinction between smoked and snorted cocaine “was a big mistake when it was made,” Biden admitted in a speech he gave just before entering the presidential race in 2019, nine years after Congress approved a law that shrank but did not eliminate the sentencing gap. “We thought we were told by the experts that crack…was somehow fundamentally different. It’s not different.” The misconception, he added, “trapped an entire generation.”

These are just a few examples of Biden’s enthusiasm for coming down hard on people who dare to defy the government’s arbitrary pharmacological decrees. You can read more about that here.

Nowadays, Biden opposes the mandatory minimums and death penalties he championed for decades. But his current position still reflects his commitment to using force against people engaged in peaceful conduct that violates no one’s rights.

While Biden considers that approach enlightened and humane, there is no moral justification for foisting “treatment” on people who do not want it and may not even be addicted. That policy strips people of their liberty, dignity, and moral agency simply because they consume psychoactive substances that politicians do not like. Biden, who in the late 1980s was saying “we have to hold every drug user accountable,” now wants to lock drug users in “rehab centers” rather than prisons. If that looks like an improvement, it is only because Biden’s prior record is so appalling.