At long last we have a winner, or two winners, take your pick.

Bernie Sanders won the popular vote but Peter Buttigieg will get a plurality of delegates. 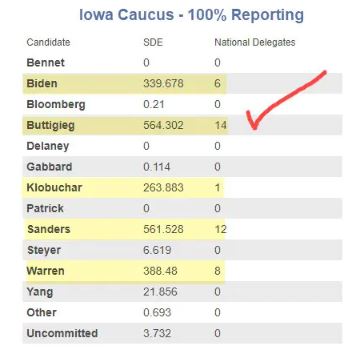 Nonetheless, the AP will not call a winner because but Caucus Officials Won’t Correct All Errors, not even blatant ones.

The state party’s review indicated that Pete Buttigieg was the delegate winner, but caucus tally sheets could not be changed even if they contained mistakes, according to a lawyer for the party.

The Associated Press, which historically verifies election results and makes calls on the outcome of races, has not allotted the final delegate to Mr. Buttigieg because of the errors in the caucus results-counting, nor has The A.P. declared a winner in the Iowa race. The Times, which has followed The A.P.’s calls in the past, has not assigned the final delegate to Mr. Buttigieg.

And the new results are not necessarily final: Campaigns have until noon on Monday to request that the statewide vote count be re-examined, after the party moved the deadline from Friday.

The party could not change even blatant miscalculations on the worksheets, according to a lawyer for the party, because they were a legal record and altering them would be a crime.

“The incorrect math on the Caucus Math Worksheets must not be changed to ensure the integrity of the process,” wrote the party lawyer, Shayla McCormally, according to an email sent by Troy Price, the chairman of the party, to its central committee members. The lawyer said correcting the math would introduce “personal opinion” into the official record of results.

By the way, this includes the fact that some precincts awarded more delegates to candidates than they were allotted.

Apparently, that is a matter of opinion.

The most blatant were errors in adding up votes for candidates, which take place in two rounds, and miscalculations when using a formula that translates raw votes to “state delegate equivalents.”

Once certified, correcting math and spreadsheet errors becomes a matter of “personal opinion”. This even includes precincts awarding more delegates than they are entitled to.

It seems to me that certifying piss poor math is personal opinion and the math is fact.

But even with a degree in civil engineering and several courses in calculus plus differential equations, I stand corrected. Apologies offered.

Clearly, this new math is tricky, which is why we need an app.