For weeks, the coronavirus news has been paralyzingly bad, leaving President Trump, the Democratic candidates, and the media with little to offer in the way of pragmatic or inspiring leadership on the issue. But over the past few days, data on new infections in Wuhan, China and in South Korea suggest that there might be light at the end of the tunnel.

It now is conceivable that an aggressive response in America could not merely “slow the spread” and “flatten the curve” of this exponentially growing outbreak, but crush it altogether. America’s aim should not be moderation of the epidemic, but its eradication.

Our goal should be not just to lose more slowly and gracefully, but to win.

The most sophisticated idea back in February was that the best we could hope for was to spread out the incidence of infection over enough months to avoid the apocalyptic scenario in which America’s medical system is overwhelmed and exhausted doctors must make triage decisions between treating COVID-19 victims and, say, heart attack victims.

University of Washington biologist Carl T. Bergstrom developed this useful hypothetical graph below (which he specifies is “freely available for any use under the CC-BY-2.0 license”) to get across the idea of how slowing the spread can lessen the chances that your loved one will be turned away by the hospital.

In Bergstrom’s graph, the horizontal axis is time and the vertical axis is the number of cases at any one point. Under uncontrolled transmission (the graph’s red curve) of the new coronavirus in the United States, it’s almost inevitable that our approximately 95,000 intensive care unit (ICU) beds would be filled, followed by the rest of the hospital beds in the country. Hospitals in northern Italy may be approaching this dire situation now. 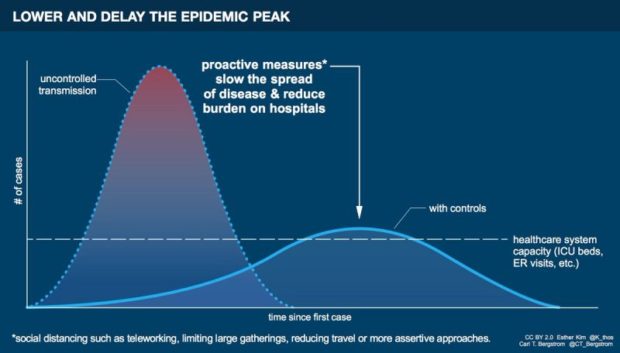 If we can flatten the curve enough to follow the blue curve, the total number of cases wouldn’t be all that much different than under the unconstrained red curve, with both curves relying upon herd immunity to eventually reduce new cases to zero; but the total number of deaths from the pandemic under the slower trajectory will be much less because there would always be almost enough hospital capacity for everyone.

But slowing the spread, while a valid idea, is still a depressing goal, especially because the economic costs of the kind of social shutdowns imposed in China, and now in Italy, are no doubt enormous. The hope of flattening the curve reminds me of the dreary sports cliché that goes back at least to O.J. Simpson in 1968, “You can’t stop O.J., you can only hope to contain him.”

So, fighting a long, drawn-out war of attrition with COVID-19 has yet to galvanize the public or its leadership. Lots of Americans seem at present to be thinking: “Eh, just let it run amok and let’s get it over with.” But they don’t yet realize how awful the peak would be when the health care system overloads.

The post Crushing the Coronavirus Curve appeared first on LewRockwell.