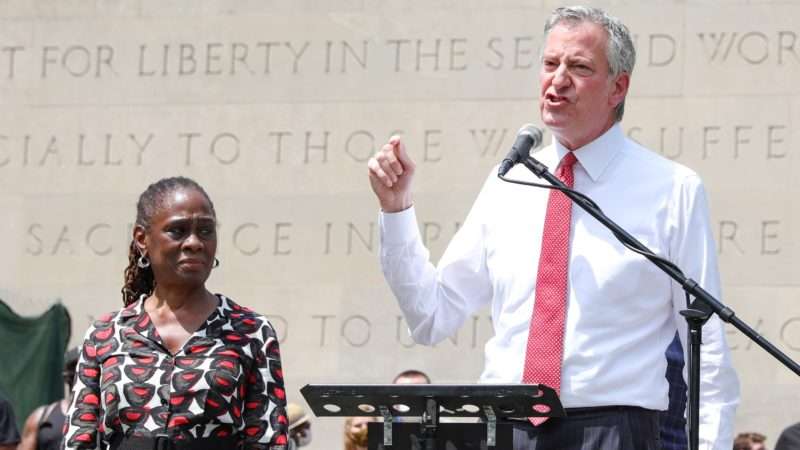 About a month after Bill de Blasio personally led a police raid on a Hasidic rabbi’s funeral in Brooklyn, which he portrayed as an intolerable threat in the era of COVID-19, New York’s mayor visited the same borough to address a tightly packed crowd of protesters who had gathered in response to George Floyd’s death. Far from ordering them to disperse in the name of public health, the unmasked mayor enthusiastically expressed solidarity with the demonstrators.

The contrast between de Blasio’s anger at Jewish mourners and his solicitude toward political protesters figures prominently in last Friday’s decision by a federal judge who deemed New York’s pandemic-inspired restrictions on religious gatherings unconstitutional. The ruling, which said COVID-19 control measures violate the First Amendment’s guarantee of religious freedom when they draw arbitrary distinctions between religious and secular conduct, is a warning to politicians across the country as they loosen the sweeping restrictions they imposed in the name of flattening the curve.

“Something absolutely unacceptable happened in Williamsburg tonite,” de Blasio tweeted the day of the funeral raid. “When I heard, I went there myself to ensure the crowd was dispersed. And what I saw WILL NOT be tolerated so long as we are fighting the Coronavirus.”

De Blasio added: “My message to the Jewish community, and all communities, is this simple: the time for warnings has passed. I have instructed the NYPD to proceed immediately to summons or even arrest those who gather in large groups. This is about stopping this disease and saving lives. Period.”

But that period turned out to be a comma, followed by an exception for large outdoor gatherings promoting a cause that appealed to the mayor’s progressive instincts. As U.S. District Judge Gary Sharpe noted when he issued an injunction against New York’s limits on religious services, both de Blasio and Gov. Andrew Cuomo actively encouraged the recent protests against police brutality.

Sharpe agreed with the plaintiffs—two Roman Catholic priests from upstate New York and three Orthodox Jews from Brooklyn—that de Blasio and Cuomo had created a de facto distinction between religious and political gatherings. He also noted explicit restrictions on religious activities that did not apply to secular activities posing similar risks of virus transmission.

The rules limited attendance at indoor church and synagogue services to 25 percent of capacity while allowing various businesses, including stores, offices, salons, and restaurants, to operate at 50 percent of capacity and imposing no limit on special educational services. The state “specifically authorized outdoor, in-person graduation ceremonies of no more than 150 people” while imposing a 25-person limit on outdoor religious gatherings, including masses, funerals, and weddings.

The Supreme Court has said neutral, generally applicable laws that happen to restrict religious activities are consistent with the First Amendment. But it also has said laws that impose special burdens on religious activities are subject to strict scrutiny, meaning they are unconstitutional unless they are narrowly tailored to achieve a compelling government interest.

Sharpe concluded that New York’s rules were not generally applicable and could not pass the strict-scrutiny test. While that analysis seems straightforward, federal appeals courts have split on the question of whether state restrictions on religious services are neutral and generally applicable.

Last month, when the Supreme Court declined to issue an injunction against California’s restrictions, Chief Justice John Roberts dismissed the idea that the state was discriminating against houses of worship by applying special rules to them—a position that mystified the four dissenters. When churches, synagogues, mosques, and temples are prepared to follow the same social distancing and hygiene rules that apply to other settings where people gather for extended periods of time, they thought, there is no rational basis for treating them differently.

Courts are understandably reluctant to second-guess state and local decisions about how best to deal with a contagious and potentially deadly disease. But this is one of the areas where the Constitution requires a less deferential approach.