The class assignment was to interview an adult about a memorable presidential election. My niece, Calista Madzar, chose her grandfather (my dad). The result is a thing of beauty. Bretigne Shaffer. 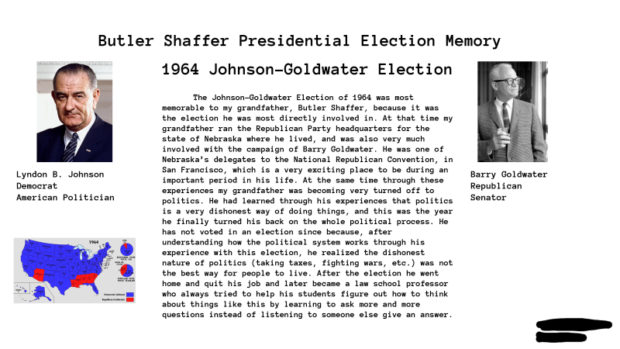 Here is the text:

The Johnson-Goldwater Election of 1964 was most
memorable to my grandfather, Butler Shaffer, because it was
the election he was most directly involved in. At that time my
grandfather ran the Republican Party headquarters for the
state of Nebraska where he lived, and was also very much
involved with the campaign of Barry Goldwater. He was one of
Nebraska’s delegates to the National Republican Convention, in
San Francisco, which is a very exciting place to be during an
important period in his life. At the same time through these
experiences my grandfather was becoming very turned off to
politics. He had learned through his experiences that politics
is a very dishonest way of doing things, and this was the year
he finally turned his back on the whole political process. He
has not voted in an election since because, after
understanding how the political system works through his
experience with this election, he realized the dishonest
nature of politics (taking taxes, fighting wars, etc.) was not
the best way for people to live. After the election he went
home and quit his job and later became a law school professor
who always tried to help his students figure out how to think
about things like this by learning to ask more and more
questions instead of listening to someone else give an answer.

The post Interview With Butler Shaffer appeared first on LewRockwell.