Iran Outflanks the US

Iran has successfully navigated the first phase of its resistance to U.S. sanctions pressure. The U.S. State Department has admitted it’s goal of reducing Iran’s oil exports to zero is not feasible.

The goal now is a 25% drop to 800,000 barrel per day. And that is no joke. It’s a big drop from where Iran was looking to produce in the coming years under the auspice of the JCPOA.

The U.S. will not stop until all avenues have been exhausted or Trump fires his current cabinet.

Iran’s total non-oil exports have suffered as well, since gas condensate exports have also dropped along with the crude oil numbers.

But Iran is finding friends in other places. They are currently finalizing a free trade agreement with the Eurasian Economic Union (EAEU) with Belarus leading the talks at the 15th meeting between their Joint Economic Committee.

Iran’s non-oil exports, however, are still just one-fifth of their peak exports. Like Russia it is working quickly with regional partners to change that dynamic.

It won’t be enough to overcome the U.S.’s economic pressure in the short term.

But as I always say if it survives the initial onslaught then market forces open up opportunities for change. Things like INSTEX, the EU special purpose vehicle for getting around U.S. sanctions, is a perfect example.

Bilateral trade outside of the U.S. dollar is another.

The completion of the North South Transport Corridor (NSTC) is also helping. For example, trade turnover between Azerbaijan and Iran rose more than 70% last year.

Speaking in the event, [Azeri Trade Minister] Mustafayev mentioned the 12 meetings between the two countries’ presidents during the past five years and said “that is an indication of how good the relations between the two countries are.”
“In 2018, trade between the two countries increased by 74 percent. Azerbaijan hasn’t had such a boost in trade with any other country.” The official said.
The Azeri minister referred to energy, transportation, industry and tourism as good areas for developing bilateral relations with Iran, and called for Tehran to strengthen relations in these areas.
He further mentioned the friendly relations between his country, Iran and Russia and called for the strengthening of trilateral relationship between Tehran, Baku and Moscow.

Lurking in the background of this meeting is EAEU membership and U.S. influence in Baku. Vladimir Putin, for his part, has been very successful making in-roads with President Ilham Aliyev.

Without that work by Putin the five countries bordering the Caspian Sea wouldn’t have settled on a treaty. This caught the U.S. flat-footed who used Azerbaijan for years to keep the status of the Caspian in flux.

Once Russia relented on a gas pipeline from Turkmenistan through Azerbaijan to Europe things changed. Again, people respond to incentives and new data. 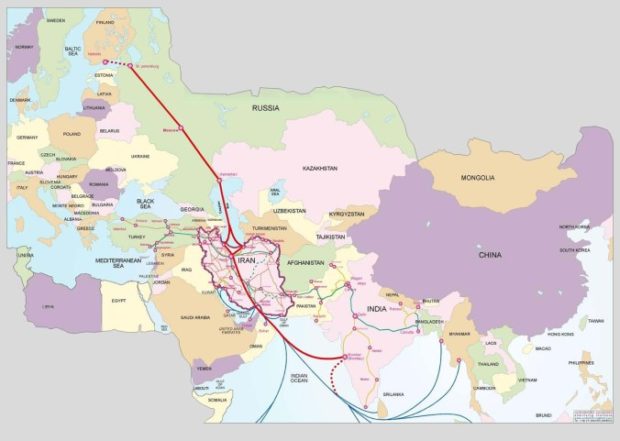 The Main Leg of the North South Transport Corridor

And that bodes well for Iran because it also secures the maritime portion of the NSTC by shoring up, legally, the status of ships crossing Azeri waters between Iran and Russia. It also paves the way for the two countries to develop gas resources jointly.

The North South Transport Corridor is changing the landscape of central Asia. Russian goods no longer have to go by boat all the way around the world to reach Iran and India.

It bypasses important choke points, like the Mediterranean and the Suez.

Most infuriating for Trump, Bolton and the rest of the neocon cretins, it puts Iran at the center of opening up the whole of the Middle East and Central Asia.

Because the NSTC is now active, we’re seeing movement on Eurasian integration which will only accelerate. It is clear Trump is hopeless as a force for change of the traditional U.S. policy of chaos.

But the bigger news is President Rouhani’s very successful three-day visit to Baghdad last week. Rouhani was hailed as a national hero to the new Iraqi government, a government less in the thrall of its U.S. occupiers.

Rouhani met with every major political and religious figure in Iraq this week. The two countries agreed to new economic projects set to swell bilateral trade to $20 billion from the current $12 billion.
They signed deals to invest in energy as well as increase sales of Iranian gas and electricity to Iraq. The big issue being that Iraq will be a major source of dollars for Iran, still needed as it winds down domestic use of our currency.
These are both very important given the Trump administration’s very public goal of shutting down Iranian oil exports and desire for regime change in Tehran

Iraq is in no mood to knuckle under to Trump and Secretary of State Mike Pompeo’s bloviating about the evils of Iran.

Remember it was Trump who made a secret visit to Iraq at Christmas and left after three hours because the Iraqi Prime Minister refused to be summoned like some lackey.

According to Elijah Magnier there are two factions now in Iraqi politics.

Iraq today is divided between a large faction of politicians calling for the total withdrawal of US forces from the country, and another which wants to maintain a reduced US force in charge of training and intelligence exchange.

Both factions want to see most US forces leave the country, and can likely reach an agreement on accepting a small specialized force on the ground. The Iraqi government would like to strike a balance and maintain both a fair relationship with the US and excellent ties with Iran.

Iran and Russia are both playing for time for that to develop.

This is why Mike Pompeo is in Lebanon this week. He will threaten the Lebanese to give up support for Hezbollah or else they will be treated like Iran and Venezuela.

He’s also there to assist war criminal and Israeli Prime Minister Benjamin Netanyahu get re-elected next month. How Pompeo is treated by Lebanon will be telling as to where things are headed from here.

I suspect he’ll be treated with the same thinly-veneered disdain that German Chancellor Angela Merkel showed both Pompeo and Vice President Mike Pence at the Munich Security Conference last month.

Lebanon can no more comply with Pompeo’s stated goals of excising Hezbollah from Lebanon’s state affairs then he can distance himself from the siren’s call of a Chinese buffet table.

So, expect after the visit the U.S. follows the U.K. in fully sanctioning Lebanon as a terrorist state, refusing travel, seizing assets. The whole nine yards. All in the name of human rights and fighting terrorism, of course.

Meanwhile, Lebanon is struggling with housing more than 1 million Syrian refugees while the U.S. actively blocks their return home.

Bolton keeps the military situation unsettled and the Treasury Dept. blocks aid through the threat of sanctions helping to rebuild Syria.

It’s like the reverse Marshall Plan. Wage a war on a foreign country. But this time lose and block rebuilding by declaring anyone that does so to be an ‘enemy of peace.’

This heavy-handed strategy is obviously meant as blackmail to accept Jared Kushner’s idiotic, dead-on-arrival but still unveiled peace plan. The goal is advancing greater Israel in the face of massive opposition. It also paves the way for Genie Energy to take the oil and gas under the Golan Heights.

There is a limit to what sanctions and threats can accomplish. And the U.S. is about to find out what that limit is. Chaos only works in the short-term and its expensive.

The costs are written all over the balance sheet of Pax Americana. The moves the U.S. makes today create tomorrow’s headlines. If maintaining this Empire of Chaos, as Pepe Escobar calls it, was so efficient the U.S. wouldn’t be complaining about its cost.

Iran, Russia and China understand this. Arrogant men like Pompeo, Trump and Bolton never will.

The post Iran Outflanks the US appeared first on LewRockwell.