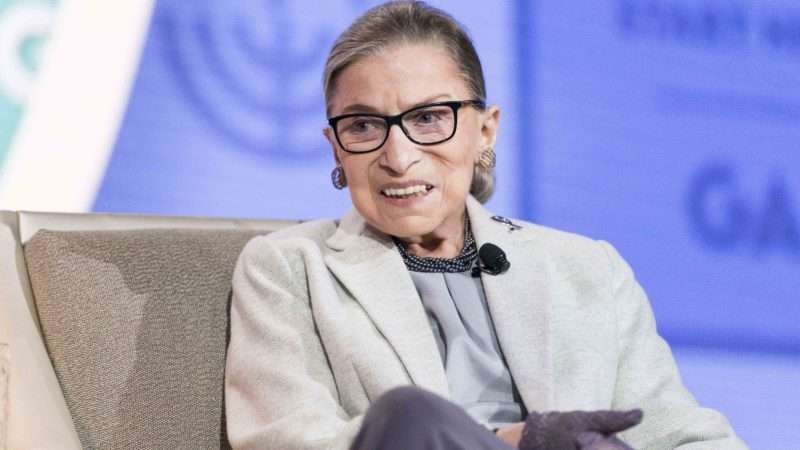 Ruth Bader Ginsburg, the pioneering lawyer who became a liberal hero and pop culture icon during her lengthy career on the U.S. Supreme Court, died today at the age of 87.

Ginsburg was already a towering figure in legal circles when President Bill Clinton appointed her to the Supreme Court in 1993. In 1972 Ginsburg co-founded the Women’s Rights Project at the American Civil Liberties Union (ACLU), where she played a central role in the campaign to overturn a series of legal precedents that formally enshrined the inequality of women. Slowly but surely, Ginsburg and her allies moved the law in their preferred direction. She then capped off that remarkable career by becoming an accomplished federal judge.

Ginsburg capped off her judicial career by becoming a bona fide celebrity. Popularly known among her legions of fans as “Notorious RBG” (a play on the name of the late rapper Notorious BIG), Ginsburg has enjoyed a sort of rock star status in recent years, with her praises sung in books, articles, documentaries, movies, TV interviews, Saturday Night Live skits, and countless internet memes.

Given her massive popularity, especially among the younger progressive set, it is easy to forget that Ginsburg was not always a darling of the left. For example, Ginsburg once caused real discomfort in feminist legal circles by repeatedly criticizing Roe v. Wade, the 1973 ruling which recognized a woman’s constitutional right to have an abortion. The Court “ventured too far” in Roe when it “called into question the criminal abortion statutes of every state,” Ginsburg wrote in 1985. This “heavy-handed judicial intervention was difficult to justify,” she argued, “and appears to have provoked, not resolved, conflict.”

What is more, Ginsburg insisted, Roe itself stood on dubious legal foundations. Roe‘s author, Justice Harry Blackmun, had grounded the right to abortion in “personal privacy, somehow sheltered by due process,” as Ginsburg put it. It would have been much better, she declared, if the right had been rooted in “a constitutionally based sex-equality perspective.”

She took aim at Roe yet again in a 1993 lecture at New York University School of Law. The Texas statute at issue (which banned all abortions except where the life of the mother was at stake) “intolerably shackled a woman’s autonomy,” she observed. But “suppose the Court had stopped there, rightly declaring unconstitutional the most extreme brand of law in the nation, and had not gone on, as the Court did in Roe, to fashion a regime blanketing the subject, a set of rules that displaced virtually every state law then in force. Would there have been the 20-year controversy we have witnessed?”

In other words, Ginsburg not only threw shade at Roe‘s reasoning, but she argued that the far-reaching decision actually gave the anti-abortion movement a boost. Not exactly music to the ears of most pro-choice activists.

Ginsburg had her share of libertarian legal critics too. In 2012, when the Supreme Court was weighing the constitutionality of the Patient Protection and Affordable Care Act, libertarian scholars and activists were at the forefront of the legal wrangling, arguing that Congress lacked the lawful authority under the Commerce Clause to compel every American to buy health insurance. Ginsburg would denounce that argument as “stunningly retrogressive.”

In 2005, when the city of New London, Connecticut, sought to broaden its tax base by bulldozing a working-class neighborhood and handing the land over to private developers, Ginsburg showed little interest in the homeowners’ constitutional objections. “The critical fact on the city side,” she told Institute for Justice lawyer Scott Bullock, lead attorney for the homeowners, during oral arguments in Kelo v. City of New London, “is that this was a depressed community and [the government] wanted to build it up, get more jobs.” Ginsburg later joined Justice John Paul Stevens’ majority opinion, which asserted that when it came to the use of eminent domain, the government should enjoy “broad latitude in determining what public needs justify the use of the takings power.”

With Ginsburg dead, all eyes now turn to the U.S. Senate. In 2016, with a presidential election on the horizon, Senate Republicans refused to even hold hearings on President Barack Obama’s SCOTUS nominee, Merrick Garland, thereby setting the stage for President Donald Trump to appoint Neil Gorsuch in 2017.

What will those same Senate Republicans do now that another SCOTUS vacancy has arisen with a presidential election looming? According to Senate Majority Leader Mitch McConnell (R–Ky.), whomever Trump picks to replace Ginsburg “will receive a vote on the floor of the United States Senate.”

Expect the Trump administration to name a nominee quickly. Who might get the nod? One name that is sure to be on the shortlist is Amy Coney Barrett.

A former Notre Dame law professor, Barrett was confirmed to the U.S. Court of Appeals for the 7th Circuit in October 2017 after a heated confirmation hearing before the Senate Judiciary Committee. In particular, Barrett, a committed Catholic who has written frequently about matters of faith and law, was sharply queried by Sen. Dianne Feinstein (D–Calif.) about whether her religious views would prevent her from serving as an impartial jurist. “The dogma lives loudly within you, and that’s of concern when you come to big issues that people have fought for years in this country,” Feinstein said.

Feinstein’s remarks quickly transformed Barrett into something of a folk hero among social conservatives, who saw the Democratic senator as attacking one of their own. Those same social conservatives would undoubtedly go to the mattresses for a Barrett SCOTUS nomination. Put differently, by nominating Barrett, Trump would be throwing a heap of red meat to his supporters on the religious right. The resulting Senate confirmation hearings would go full-tilt culture war.

One thing is certain: The death of Ruth Bader Ginsburg means that American politics are about to get a whole lot crazier.