Think You’re Prepared for the Next Crisis?

No plan of operations extends with any certainty beyond the first contact with the main hostile force.

Everybody has a plan until they get punched in the mouth.

How right he was.

History has shown time and time again that the only 100% predictable outcome to any given strategy is that, when implemented, things will not go 100% according to plan.

Dwight D. Eisenhower, the Supreme Commander of the Allied Expeditionary Forces in Europe during WW2, went as far as to say: “In preparing for battle, I’ve always found that plans are useless but planning is indispensable.”

This wisdom very much applies to anyone seeking safety from disaster. Whether preparing for a natural calamity, a financial market crash, an unexpected job loss, or the “long emergency” of resource depletion — you need to take prudent planful steps now, in advance of crisis; BUT you also need to be mentally prepared for some elements of your preparation to unexpectedly fail when you need them most.

Here are two recent events that drive that point home.

A family member of mine lives in Wilmington, NC, which received a direct hit last month from Hurricane Florence.

Being an avid “prepper” who has lived on the east coast all his life (i.e., well-experienced with the late summer/early autumn hurricane season), he was MUCH more geared up for this storm than his neighbors. He also had nearly a week’s advance notice to top off his preparations as the media tracked Florence’s trajectory following its formation off of the west coast of Africa.

But as ready as he thought he was, he still found he was vulnerable in places he hadn’t anticipated.

While he and his family made it through the storm all right in the end, he experienced numerous failures in his preps throughtout. Here are just a few:

Lessons From The Nevada Desert

The 30+ Peak Prosperity members who spent last week at a defensive firearm training program in the Nevada desert received a similar ‘reality check’.

Most who participated already owned firearms and had invested previous hours at their hometown ranges honing their shooting skills. Or so they thought.

What they quickly realized is that shooting at a stationary paper target under controlled conditions is easy. But maintaining the same accuracy and precision under stress is hard.

Simply adding time-pressure makes shooting well exponentially harder. From a distance as short as 5 yards, hitting the target center-mass repeatedly is an easy task when untimed. But put on a 1.5-second time limit to get your shots off — which leaves little time for aiming and spikes your adrenaline levels — and suddenly the misses multiply.

And of course, using a handgun in an acutal kinetic altercation is orders of magnitude more stressful than what we experienced. Low lighting, a moving target who may be armed and/or actively attacking, endangered loved ones, the threat of being seriously injured/killed — these factors will undoubtedly handicap your proficiency to a MUCH greater extent.

We did one simulation drill ‘clearing’ a home, opening doors that may or may not have bad guys behind them. The added uncertainty and awkward ‘real life’ obstacles resulted in a lot of misses and accidentally-killed bystanders. Thank god it was just a simulation.

The hard-hitting insight learned during this experience is: If you haven’t stress-tested your gear and your skills under the same conditions you plan to rely on them in, you’re woefully underprepared. And to think different is dangerously deluding yourself.

For those of you with preparations in place — in case of a home invasion, or a fire, or a week without access to the grocery store, or a grid-down event, etc — have you actually done a ‘dry run’ to explore how smoothly/poorly your plans work in practice?

How Ready Are You, Really, For A Financial Crisis?

Here at PeakProsperity.com, we’ve been vocally warning about the high risk of another global financial crisis on par with (or worse than) that seen in 2008.

Quite honestly, we’ve been warning about this for a long while, as markets have powered higher. While that’s been very frustrating to endure, we see the market’s manic melt-up as further reason to worry — as the fall from today’s over-extended heights will be that much more painful.

And we may finally be seeing the onset of a correction. Wall Street’s ‘Fear Gauge’ is suddenly spiking, signalling that traders expect increased volatility along with falling prices:

The scariest Halloween costume imaginable pales in comparison to a Friday inversion of the VIX futures curve.

A severe sell-off in technology stocks has pushed the front-month VIX futures contract to a premium relative to the second-month contract. 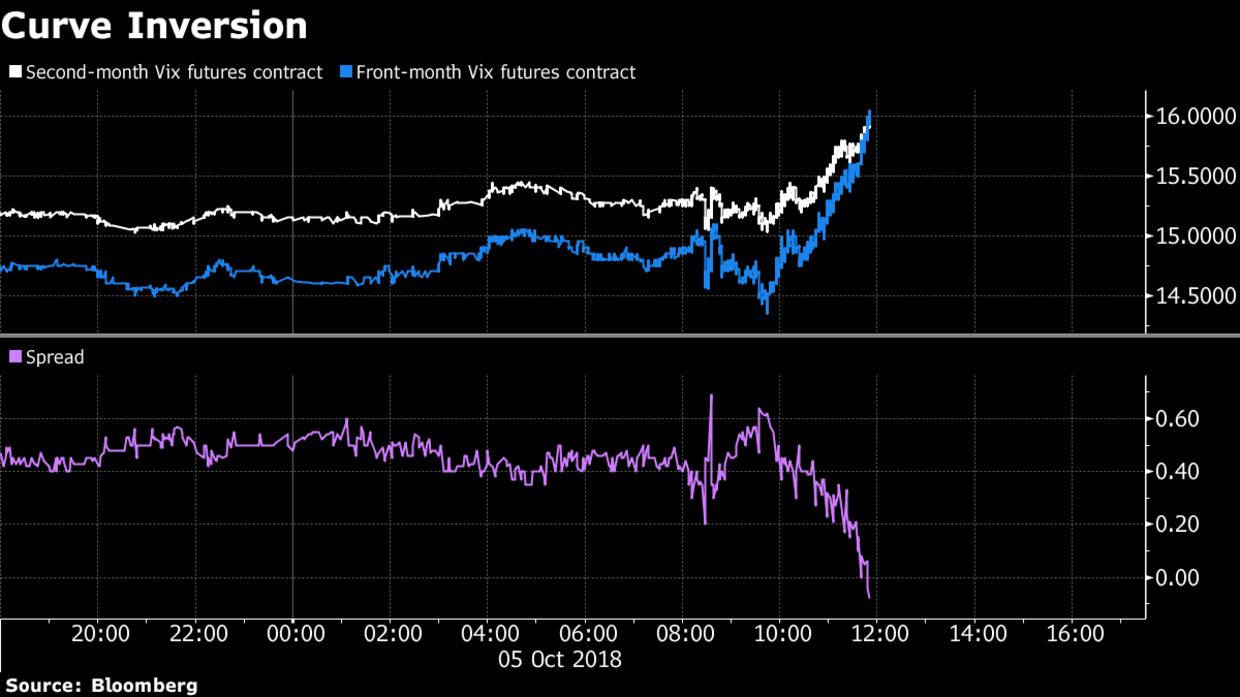 VIX futures are based off the Cboe Volatility Index, a measure of 30-day implied volatility for the S&P 500 Index that’s often called the “fear gauge.”

Typically, the curve is in contango — that is, upward sloping — because the outlook for U.S. equities is more uncertain over longer time periods than shorter ones. The historical pattern of realized volatility shows it’s prone to outsized spikes but generally trades in a modest range.

A curve that’s in backwardation — the opposite of contango — indicates traders are acutely concerned with the near-term outlook for equities. This structure also provides a tailwind to investors looking to go long volatility through exchange-traded products.

Given the spasm of instability that has rocked the bond and stock markets over the past 48 hours, Chris Martenson just issued a warning to Peak Prosperity’s enrolled subscribers, explaining why the recent activity is so concerning.

Here’s just a small part of what he had to say:

Joining the 10-year in breaking its long-term downtrend line are the 30-year and 5-year bond yields: 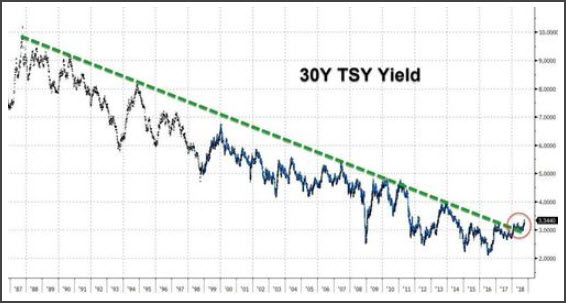 Dialing in a little closer, we see that the 30-year bond yield has more recently carved out a pretty convincing “head and shoulders” pattern which indicates a strong likelihood of heading higher: 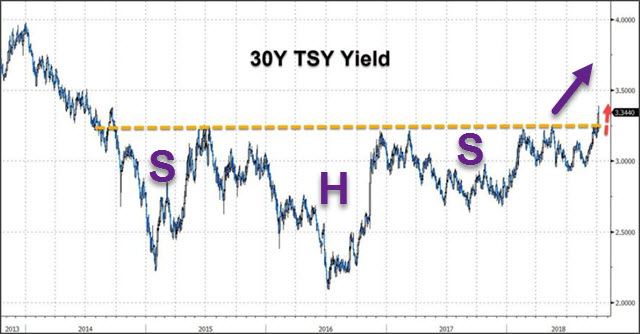 Here’s the 5-year bond yield chart. It also looks like a breakout: 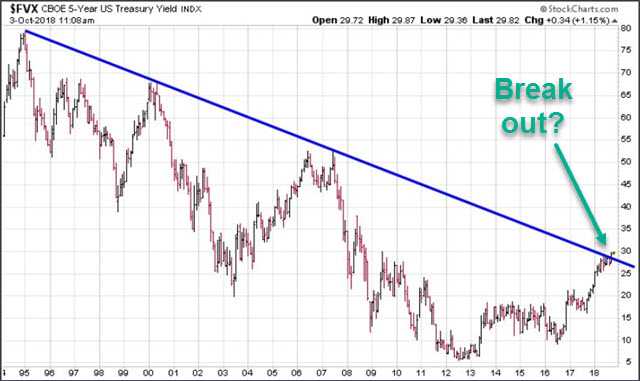 What’s fascinating is that as the stock market has only recently started to wobble a bit, the main US Treasurys have been declining in earnest since mid-August: 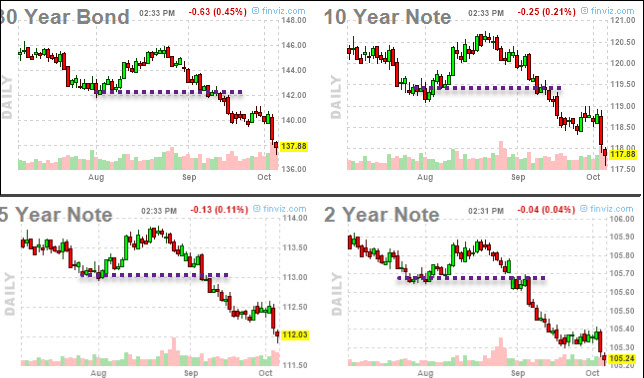 To recap: what we’re seeing now is very consistent with the end of a major credit-liquidity cycle.  Everything is being sold.  Stocks and bonds.

There’s been no ‘Jell-O moving around the plate’ — which is the flight-to-safety effect where bonds do well on days stocks do poorly, and vice versa.  Both stocks and bonds are being sold off, and bonds have been going first.

As they say on Wall Street: Stocks are for show, but bonds are for dough. Meaning the smart money is in bonds, and they tend to tell the tale first.

So how ready are you, really, if we’re indeed headed into another 2008-style market crash?

One in which the major stock market indexes could drop 50% or more in a matter of just a few weeks? Where housing prices could drop by 30-40% (or more) and home buyers go on strike? Where bond prices relentlessly drop as interest rates march higher, freed from a decade-long supression at historic lows? Where mass layoffs return, and hundreds of thousands of workers lose their jobs each month?

Are the steps you’ve put in place to-date sufficient? Have you simulated what’s most likely to happen to your portfolio, your job, and your living standards under a variety of scenarios?

I think for most reading this, the honest answer is “no”. No one is perfectly prepared. You can always do more.

For those feeling more vulnerable than they’d like, here are our recommendations for using the remaining time we have (which may not be much) wisely:

And finally, read the report WARNING: The Markets Are Suddenly Looking Very Sick that Chris Martenson just released. It’s an excellent composition of the recent developments that point to a market breakdown in-progress.

Remember: the only valuable preparations are those put in place before crisis arrives.

Or to put it more simply: To fail to plan is to plan to fail.

Reprinted with permission from Peak Prosperity.

The post Think You’re Prepared for the Next Crisis? appeared first on LewRockwell.