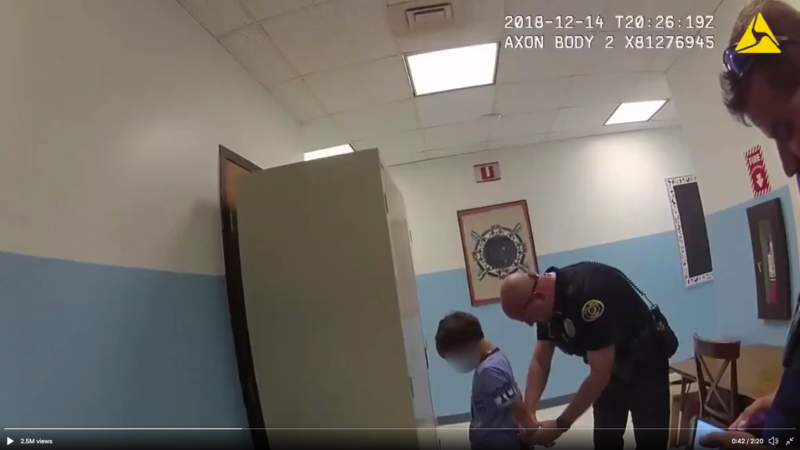 Three police officers in Key West, Florida, arrested an 8-year-old at school and tried, but failed, to handcuff the child, body camera footage released on Sunday showed. That arrest is now the subject of a federal civil rights lawsuit.

Unbelievable!! @KWPOLICE used “scared straight” tactics on 8yo boy with special needs. He’s 3.5 ft tall and 64 lbs, but they thought it was appropriate to handcuff and transport him to an adult prison for processing!! He was so small the cuffs fell off his wrists! pic.twitter.com/iSTlXdKas6

The video shows the officers telling the child he is going to jail, lightly patting him down, and attempting to put handcuffs around his wrists. The boy’s wrists are too small, though, so the officers allow him to walk out of the school uncuffed.

“You understand this is very serious, OK?” one of the officers tells the boy. “And, I hate that you put me in this position that I have to do this. OK? All right? The thing about it is, you made a mistake, now it is time to learn from it and grow from it. Right? Not repeat the same mistake again.”

Digennaro filed a lawsuit this morning against the three Key West police officers, the city, and several officials at Gerald Adams Elementary School. The suit alleges the arrest of Digennaro’s son, who had been diagnosed with oppositional defiant disorder, adjustment disorder, and other emotional disorders, violated his Fourth and 14th Amendment Rights, as well as his rights under the Americans with Disabilities Act.

The Miami Herald reported that police arrested the boy, who has not been named because he is a minor, on a felony battery charge on Dec. 14, 2018, after he allegedly punched a teacher in the chest:

“According to the arrest report, the boy’s teacher said the boy was not sitting properly in his cafeteria bench seat. The teacher asked him several times to sit down out of concerns for his safety.

After not complying, the teacher asked him to sit next to her. He refused and told her, ‘Don’t put your hands on me.’

She then told the boy to walk with her. As he did, he told her, ‘My mom is going to beat your a–,’ and then he punched her with his right hand, according to the report.”

Reason reported in June on the expanded use of SROs in Florida following the mass shooting at Marjory Stoneman Douglas High School in 2018—and a troubling number of arrests and uses of force against children with autism that followed.

Civil liberties groups and disability advocates say the increase in school police, and a renewed zeal for zero-tolerance policies for petty disturbances, have fueled the “school-to-prison” pipeline and led to disproportionate enforcement against minorities and students with disabilities. Scrutiny of the role of SROs has only increased following the police killing of George Floyd in Minneapolis. Activists have been pushing school districts across the country to shrink or totally abolish their SRO programs and redirect the funds toward student services.

“This is a heartbreaking example of how our educational and policing systems train children to be criminals by treating them like criminals,” Crump said in a statement to the Herald. “If convicted, the child in this case would have been a convicted felon at eight years old. This little boy was failed by everyone who played a part in this horrific incident.”

According to data from the Florida Department of Juvenile Justice, Florida police arrested 2,781 children between the ages of 5 and 12 in fiscal year 2018–2019, the latest year for which data are available. The youngest was a 5-year-old Hispanic boy. He was charged by the Osceola County Sheriff’s Office with felony aggravated assault.

Juvenile arrests have been declining nationwide since the mid-1990s, mirroring a national drop in crime. That’s true in Florida, too. However, while overall numbers have dropped, arrests in Florida schools plateaued and started to tick back up in 2017.

Meanwhile, the proliferation of cell phone videos, police body cameras, and social media has led to numerous incidents involving SROs abusing their power that have gone viral. In February, an officer at a high school in Camden, Arkansas, was relieved of duty after a video showed him putting a student in a chokehold and lifting the student off the ground. Last December, a North Carolina SRO was fired after he brutally body-slammed a middle schooler. In November, a sheriff’s deputy with Florida’s Broward County was arrested and charged with child abuse after a video showed him body-slamming a 15-year-old girl at a special needs school.

The Monroe County School District did not immediately respond to requests for comment for this story. Key West Police Chief Sean Brandenburg told the Herald that, “Based on the report, standard operating procedures were followed.”