What Should We Do About the War on History?

Jarrett Stepman has a new book out from Regnery titled The War on History: The Conspiracy to Rewrite America’s Past.

This is a good and timely topic, and I was excited to read what Stepman had to say.

The book is a nice, breezy read–and a worthwhile purchase–and he takes the Left to task on several issues, most importantly on Christopher Columbus, Thomas Jefferson, and Andrew Jackson.

But he could have punched harder.

I have talked a lot about the destruction of Western Civilization and in particular the assault on all things Southern and Confederate on both my show and over at the Abbeville Institute’s website and podcast–a great place to get more of me each week. 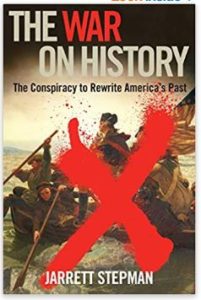 Stepman missed an opportunity to take it to the enemy. His chapter on “The War for Union” begins by discussing Robert E. Lee and ends with a defense of Abraham Lincoln?

Yes, because Lincoln is clearly under assault in America, where again?

Malcolm X thought Lincoln “did more to deceive Negroes and to make the race problem in this country than any man in history.”

I guess that counts, but Stepman does not mention this. And of course X said that to Robert Penn Warren in the 1960s.

Stepman does cite Harry Jaffa and Allen Guelzo, though. Who could pick two more strident defenders of all things Southern?

This is the problem with modern “conservatism.” They fall all over themselves trying to appeal to the Left by parroting the “proposition nation” fallacy of the founding.

Stepman falls into that trap. If the War was about slavery and nothing else, as Stepman and the neoconservatives contend, then how is the Left wrong to want to eradicate that part of American memory?

They don’t see that they are digging their own intellectual graves.

I review Stepman’s book in Episode 263 of The Brion McClanahan Show.

You can watch it here.

You can listen to it here.

Speaking of the war on history, Donald Trump supposedly stepped in it again when he insisted that Italy and the United States “are bound together by a shared cultural and political heritage dating back thousands of years to Ancient Rome.”

The Twitter historian brigade jumped on the chance to let Trump have it for his historical ignorance, that is until these nimrods woke up.

I, of course, have spoken twice about Roman influence on American history on my show and what that history means for the future of the United States. Just goes to show that listening to me puts you on the cutting edge.

I do all of this free of charge, so if you would like to help, consider supporting the show. I appreciate anything you want to send my way.
https://brionmcclanahan.com/support

The post What Should We Do About the War on History? appeared first on LewRockwell.