You Can’t Always Trust What You Hear Online, and Congress Has Some Ideas About Fixing That 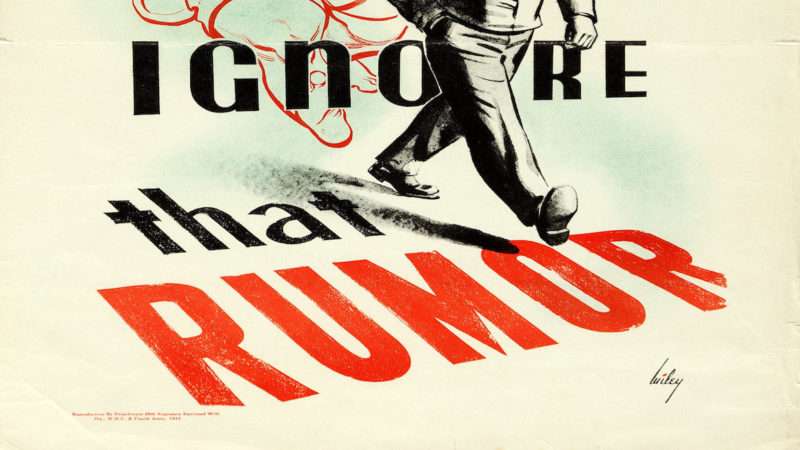 The hearings had been underway for about an hour and 15 minutes when Rep. Raja Krishnamoorthi piped up with an idea. “Are there ways,” the Illinois Democrat asked, “that we might be able to infect…the QAnon conspiracy web with other ideas or stories that could sow confusion and discord and cause it collapse in on itself? In other words, kind of embed other crazy things that might pit groups against each other?”

There was a brief pause. Then Joan Donovan, research director at Harvard’s Shorenstein Center, offered an objection. Algorithmic recommendation systems “respond to that sort of excitement,” she noted, and Krishnamoorthi’s operation might just keep the QAnon conversation alive.

It was October 15, and Donovan was one of four witnesses testifying via video call to the House Intelligence Committee. She was joined by Cindy Otis, a former CIA officer now based at the Alethea Group; by Melanie Smith, who works at the social media analytics firm Graphika; and by Nina Jankowicz, a Wilson Center analyst with the wonderful job title “disinformation fellow.” The hearing was titled “Misinformation, Conspiracy Theories, and ‘Infodemics’: Stopping the Spread Online,” and much of it was given over to discussing what public regulators and private platforms should do about the dubious claims that circulate on social media.

Early in Donovan’s testimony, for example, she quoted a statement Facebook issued in January: “In the absence of regulation, Facebook and other companies are left to design their own policies. We have based ours on the principle that people should be able to hear from those who wish to lead them, warts and all.” Donovan didn’t approve of that approach. “Policies like this push corporate responsibility onto the public and onto other professional sectors,” she complained. As a result, she argued, reporters and others have been left to clean up social media’s messes. “Covering misinformation is a drain on newsrooms’ resources, which could be much better spent on sustaining journalism rather than moderating content on platforms.”

This seems backward to me. Factchecking politicians and chasing down rumors to confirm or debunk them have always been parts of a journalist’s job. Reporters don’t always do those tasks well, but they’re much more likely to get it right than a Facebook moderator is. In my dream world, communicating on social media would typically be as unhindered as communicating on email, and moderators’ scarce attention would be reserved for genuinely abusive behavior, such as violent threats, organized harassment, and commercial fraud.

But that’s my view. The mood at the hearing was much more enthusiastic about centralized control of information, in part because so many people speaking there seemed convinced that we’re in an unprecedented crisis. Otis claimed that we live in “the biggest period of false information in history.” Jankowicz suggested that “the degradation of our information ecosystem” is “dismantling democracy.” Rep. Adam Schiff (D–Calif.), chairing the meeting, announced his hope that Americans one day will “occupy the same shared reality again.” Note that last word: again. I’m not sure when this Edenic past was supposed to be when Americans all shared the same mental universe, but it definitely wasn’t during my lifetime.

No one unveiled a 10-point plan for regulating mis- and disinformation, and I’m not sure the four people testifying—let alone the nine legislators asking them questions—would agree on every aspect of what should be done. (Smith, to her credit, noted that trying to “contain” a conspiracist community ran the risk of “compromising essential freedoms.”) But we did get some hints about potential policies, and I don’t just mean Krishnamoorthi’s COINTELPRO-on-shrooms plan to subvert QAnon by making it even crazier. Notably, both Donovan and Jankowicz said they’d like officials to create a new government agency. Donovan said this bureau could “evaluate what [misinformation’s] actual impact is on other sectors and on our information economies and then come up with recommendations.” Jankowicz went further, suggesting the agency could either “create a new set of rules or see if the rules that [platforms] created for themselves are being enforced fairly.”

Donovan also offered a comparison to the regulation of tobacco, saying that “legislation about smoking had to move beyond the rationale that it was an individual choice and accept that second-hand smoke had public health effects.” There just might be some constitutional problems with treating conspiracy theories like second-hand smoke.

The afternoon’s one voice of skepticism was Rep. Jim Himes, a Connecticut Democrat. (All the legislators present were Democrats—the committee’s Republicans opted not to show up.) “We’ve had misinformation and yellow journalism and terrible media and voter suppression forever,” Himes pointed out. Were the witnesses really sure, he asked, that the ill effects they were attributing to the internet “wouldn’t have happened without the social media misinformation?”

Jankowicz insisted that the Facebook era really is different, but neither of the examples she offered was very persuasive. One was the allegation that “the Trump campaign used Cambridge Analytica data to selectively target black voters with voter suppression ads.” That’s an odd story to cite when talking about misinformation’s real-world effects, since more and more evidence suggests that Cambridge Analytica was better at marketing itself than at actually changing elections’ outcomes.

Jankowicz’s other example was the band of militiamen charged with plotting to kidnap Michigan Gov. Gretchen Whitmer. Social media, she said, both “played a huge role in allowing that group to organize” and “seeded the misinformation that led them to organize.” But paramilitary cells were hatching violent plans long before Facebook existed—and the FBI has said that it was through social media that it learned of the Michigan plotters’ discussions in the first place. So did these platforms nurture a conspiracy that wouldn’t otherwise have existed, or did they undermine a conspiracy that otherwise might have gone farther? (And was that alleged plot really “seeded” by “misinformation”? These guys may well have believed some false rumors about COVID-19—there are plenty of those floating around, as there always are during an epidemic—but I suspect their resentment of Whitmer’s corona restrictions are rooted more in a different set of opinions than a different set of facts.)

Himes was also the one member of the committee to raise the subject of civil liberties. “Maybe it was growing up in Latin America in the 1970s,” the congressman said, “but I had a pretty up close and personal experience with governments that fought ‘misinformation.'” This background, he continued, made him “violently allergic” to getting the government involved in the information management business, and it also made him wary of pressuring private companies into doing the government’s dirty work for it. “We understand that we shouldn’t be in the business of fighting misinformation—that’s probably inconsistent with the First Amendment,” he said. “So what do we do? We ask that it be outsourced to people that we otherwise are pretty critical of, like Mark Zuckerberg and Jack Dorsey. We say, ‘You do it.’ Which strikes me as a pretty lame way to address what may or may not be a problem.”

Jankowicz responded by reassuring Himes that she didn’t support anything like the “draconian ‘fake news’ laws” that have been adopted in several authoritarian countries. But she roused his civil libertarian instincts again a little later, when she said that social media allow potentially violent groups to organize “without any oversight.”

“I’m out of time,” Himes replied with regret. “I would love to continue this conversation and pursue what you mean by groups being formed, quote, ‘without oversight.’ That also is language I’d like to better understand.” You’re not the only one, congressman.